Since moving in our home in 2007, I’ve had multiple failed attempts at growing a high country garden at an elevation of 7,680 feet where we have 8 months of snow on the ground annually. I remember the very first garden was when our boys were still little. I planted a 5’ x 8’ ground level garden bed against a north-facing wall and surrounded it with a one-foot river rock wall. We took pictures, went to bed satisfied, and ready to start our journey. For you more seasoned gardeners, you’re probably shaking your head right now because you already see all of the mistakes I made 😏. The next morning, I woke up to the rock wall fence toppled over and a big dog turd right in the middle of the new garden. I was so livid with that darn dog, but I cleaned everything up and put up some railing to keep her out. The next morning, she toppled the fences again and spun out in the garden creating a horrible mess. I gave up on gardening that year.

Little did I know that I live in zone 4a which only has a 75-day growing season. Growing on a north-facing wall may have produced radishes and perhaps some kale, but not much of anything else. The size of the bed would have made it impossible for me to get to any plants growing against the wall without stepping on the garden and compacting the soil. And that wall never had a chance against that dog.

The next year, I started doing a little research and invested in some good books about gardening in the high country. I attended high country gardening classes, took tons of notes, watched plenty of YouTube videos, and set out to try again. This time, we built raised beds that were about 8 inches off the ground and added a hoop system to cover the garden. The hoop system could be lifted out of the way so we could reach both sides of the garden bed without having to step into the garden. We were going to rock it this year… or so we thought.

The beds were really long, and one of the hoops that raised out of the way covered 8 feet while the other covered 4 feet. Not a big deal, but by the end of the gardening season the wind and constant opening and closing caused it to weaken… one day I was pretty sure the wind was going to fly away with it. We also had chickens that would peck at the bottom part of the plastic and we had to figure out ways to cover the portion of plastic they could reach before the entire thing was pecked away. I did get vegetables that year and I learned about bugs that like to also enjoy your plants.

After two years of putting the work into gardening and feeling less and less like an actual gardener, I gave up gardening for a few years. I took it out on my houseplants and they were sad for a bit, but they all survived and are still with me today.

Last year, I vowed to try again, albeit on a smaller scale. In the previous years, we had gotten rid of the garden beds and hoop system and attempted laying grass, but the dogs (yes, we got more) destroyed the grass. The backyard was a big dirt pile, which the dogs loved but my floors and spirit did not. I convinced the husband to build me a small – say 4’ x’ 5’ cold frame in a corner that got plenty of sun. I went to more gardening classes and met Penn and Cord who taught me about growing tomatoes at high altitudes, how to amend the soil, how to compost, how it’s best to get locally sourced seeds, the importance of a covered garden, how to warm the soil, and so much more. I was going to be a gardener – this was my year.

We built a modest cold frame using 6MM clear twin-wall polycarbonate as the cover. We ended up adding bird spikes to the top to keep the dogs off of the top, and before placing the cold frame, we built a hot box. A hot box creates a warm environment for the garden where it is heated from the ground up (this is starting to get fun). We dug down about 2’ to lay a 1’ layer of straw mixed with green manure. We then covered with a bit of the original dirt and compost mix before placing a heating coil down and finally adding the remaining dirt to fill the 2’ dig. After placing the cold frame in place, I planted seeds that I had ordered from high country gardeners like Miss Penn’s Mountain Seeds and Seed Trust. I purchased open-pollinated seeds that were organic and made sure the seeds were good for cold climates and short seasons. I also purchased a soil thermometer to monitor the soil temperature. My garden ended up producing all summer long and extended into the late fall.

This year, we really stepped our game up and built two raised garden hoop houses out of upcycled pallets that can open and close to allow for them to be vented. They look like covered wagons, so we named them Chuck (Wagon) and Red (Wagon). In Chuck, we planted already started plants of kale, cabbage, collards, tomatoes, squash, cilantro, and onions. In Red, we started from seed spinach, radishes, lettuce, pole beans, basil, carrots, and arugula. We also planted already started kohlrabi, kale, and collards in Red. In the cold frame, we planted swiss chard, lettuce, onion, cilantro, and basil. In containers, I planted corn, carrots, broccoli, tomatoes, sweet peas, and pole beans. I also invested in a new AcuRite 06043M weather station so I could monitor the temperature inside Chuck and Red compared to the outside temperature and the temperature inside of our house.

A month into gardening and I picked some kale last night from Chuck which is starting to fill up nicely. I’ve already started to notice temperature and humidity patterns. I vent the beds mid-day (when I’m home) to let some of the heat out and let the afternoon rain in. When we built the garden beds, we installed a watering system that self-waters all of the garden beds, and for my container plants we set-up a water barrel system to collect water from the gutters. I test the soil pH levels, moisture levels, and amount of sunlight the beds get. We are also composting for the second year in a row. None of this is to say I have a green thumb or am a legit gardener now, but things are growing and I’m being smarter on my gardening decisions. The real test will be how the beds produce in the fall, where I plan to continue growing the cold hardier plants like kale, radish, and lettuce.

SOME OF OUR LATEST POSTS 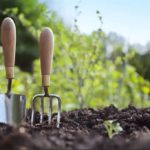 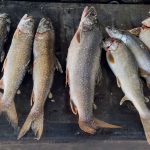