Odds are that if you stumbled upon this recipe, you’ve had carpaccio before. Carpaccio is an amazingly tasty, smooth dish of  raw meat – usually beef, but I’ve heard of fish being used too – where the meat is pounded or sliced extremely thin, topped with an oil/balsamic mix, microgreens or tasty lettuce, capers, and Parmesan cheese.  Crusty bread is usually served along the side, and at restaurants, you usually see it as an appetizer.

Because the meat is served raw, I would only eat it from a very trusted source or restaurant (and only after being frozen first). I wouldn’t be asking for this dish from a place considered a dive, but a place that sells finely aged meats – while still serving tasty food on the side – that would be the place for me. The other place I’d trust to serve carpaccio, of course, would be my own kitchen; however, I’m not trusting this meal with just any grocery store meat.  The more I know about the meat I use, the better, which makes it a perfect dish for elk or venison that we hunted hunted and processed.  I know exactly how the meat went from field to table, and makes it a safe choice for carpaccio – elk carppacio.

Disclaimer: Before Diving in with Carpaccio

It’s important to note that if the animal was gut shot – this isn’t the dish to start experimenting with. The elk should have been a clean shot. You’ll also want to know that none of the glands were punctured during the processing of the meat.  The bacteria in glands, like the tarsal gland, can be poisonous to humans. Scary, stuff. With that said, if you or your butcher properly process the animal, you’re safe (you shouldn’t be cutting into glands, anyway). Also, to play it safe, always freeze the meat first to help get rid of any potential bacteria (the same you’d do when making sushi – pre-frozen fish is always safer).

If you want a better safety precaution here, those outside tenderloins are usually pretty safe for this dish, because they’re not around the internal organs. As a rule of thumb, my husband and I won’t eat carpaccio if we happen to have our meat processed from a butcher. For the most part, we do our own, so it’s not an issue, but somewhere along the way, the superstition came that getting it done by a butcher, doesn’t necessarily mean you’re getting YOUR meat back. It could be a hodge-podge of meat; meaning, you could be getting a gut shot from someone else’s kill.  That’s too risky for us, so we only do carpaccio with the meat that we process ourselves.

This is not to say that you don’t necessarily get YOUR meat back and that butchers are evil. Heck, no, they’re amazing. And although we rarely use them to process our meat, when we do, we don’t do carpaccio out of the meat…. just playing it safe.

When I was preparing for this meal, I was collecting my other ingredients from the grocery store and the lady at check-out said, “What do you use a shallot for?” I said, “Well, if you’re asking that, I’ll really confuse you with what I’m planning on making with it.” I told her that I was preparing elk carppacio for dinner. Of course she was interested in learning more, but was hesitant.  I was hesitant too; I mean, I’m about to explain that I’m planning on eating raw meat. That’s completely normal in my world, but can come across a bit carnivorous to others. And, of course, as soon as I said raw meat, I could see I lost her focus. I told her what a shallot was, what flavor to expect, and left with a nice, “You have a great day.”

Can We Prep This Already?

If you’re still with me, odds are the thought of raw meat, especially raw beef, elk, or venison, doesn’t bother you.  So, without further ado, ladies and gentlemen, here’s our family elk carpaccio recipe. It’s simple; but, oh, so devine! 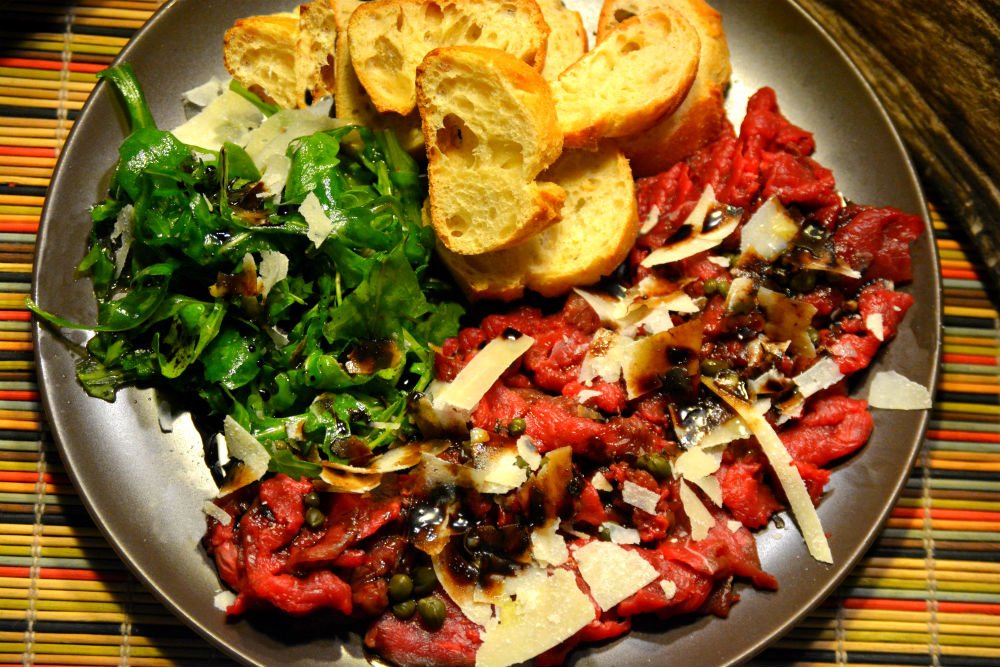 Named after the Venetian painter Vittore Carpaccio, carpaccio was invented in Venice by Giuseppe Cipriani, found of Harry’s Bar. It’s an Italian dish, but fits nicely as an appetizer before other meat and potato dishes. We usually have this as our dinner, but by all means, if you’re craving meat for breakfast – go right ahead and enjoy!
5 from 1 vote
Print Recipe Pin Recipe
Course Main Dish
Cuisine Italian
Servings 4 servings

I’ve seen some people serve carpaccio with a mustard or lemon sauce/dressing, and others serve it with a sweet berry sauce. I don’t like to hide the flavor of the meat that much, so I usually opt out of serving these toppers, but will occasionally serve them on the side so that we can discover our favorite flavors. Any microgreen will work. I love the peppery flavor of arugula in this dish, though.  Also, truffle oil can be strong, so only add a small drizzle of it, taste, and then add more if needed. Disclaimer: Consuming raw or undercooked meats, poultry, seafood, shellfish, or eggs may increase your risk of foodborne illness, especially if you have a medical condition.
Tried this recipe?Let us know how it was!
Share the Love!
Previous Post: « Dr. Pepper Tri-Tip Steak
Next Post: Benefit of Spruce Tips »

Chicken and waffles for the first time folks... so

Turns out cats ❤ indoor gardens. Had to bring i

Growing at 7,000 elevation is tough. Maybe this wi

These venison snack sticks are the perfect treat t