So, you put some beet seeds in the garden about 8 weeks ago and it’s come time to harvest and enjoy those beautiful round vegetables, but wait… how do we get to the point of cooking and enjoying beets? I’ll tell you how to easily harvest those beets and get them ready for a fresh salad.

Beets are one of the easiest vegetables to grow in your garden. They can be grown in most zones and do really well at high elevations with cool nights. They don’t need to be staked or pruned, and they’re quite resistant to pests and cold. After sowing them in the garden, you’ll wait 6-8 weeks and those beautiful beets are ready to harvest.

For high country gardeners, know that you can plant beets throughout the season, but when temperatures start to drop below 20°F they’ll stop growing. If you have covered raised beds, you can try extending your season by using Christmas lights and mulching a good 2-inch layer with straw or pine shavings over the beets.

The top of the beet sticks out of the top of the soil making it easy to see how large the beet has grown. You can pull a beet when it reaches about 2-inches wide, but it’s best to wait until they reach 6-inches wide to get more out of the vegetable.

When you pull the beet out of the ground, wrap your hand around all of the leaves and give it a tug – the beet should pop right out, but if it doesn’t, loosen some of the dirt around the beet. Bring in the entire plant to prep for cooking.

Once you pull beets, they can be stored in a couple of ways, as long as they maintain a 32° – 40°F temperature range with 95% humidity. Remove the leaves leaving 2-inches of them at the top of the beets.

You’ll want to remove the leaves before storing beets so that the plant isn’t focusing on the leaves anymore and saves its energy for keeping the beet alive.

How to Cook Beets

My favorite way to eat beets is in a salad. To get cooked beets for a salad – or really, any recipe – you simply have to remove the leaves leaving 2-inches of the leave stalks attached to the beet.

If you’re preparing two beets, which is typically the amount needed for 4 side salads, bring 8 cups of water to a boil, add 1 tablespoon of vinegar and 1 teaspoon of salt, put the beets in the water, and boil for 30 minutes. If you can easily poke a fork into the beets, they’re done.

Once done, remove the beets from the boiling water and place them on a couple of paper towels to cool off. Once they’re cool to the touch, cut the tops and bottoms off, cut them in half, and remove the skins by turning them cut side down on a cutting board and slicing the skin away.

Sometimes you can take the halved beet and use the paper towel to remove the skin by cradling the halved beet in one hand and pulling on the skin to remove it. Slice the beet halves and enjoy in your favorite recipe. Use the water you boiled the beets in as a vegetable broth for another recipe.

If you need to store cooked beets, seal them in an airtight container and store in the refrigerator for up to 5 days. Finally, after you finish a jar of pickles, save the pickle juice to add shelled hard-boiled eggs and/or beets to the juice – easy pickled eggs and beets. 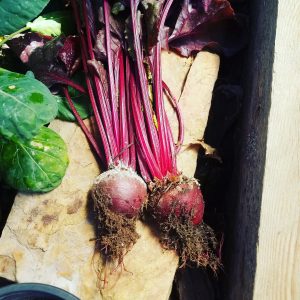