When people think of hunting the Rocky Mountains, they’re usually not thinking of hunting deer, squirrel, and rabbit. It’s the trophy elks, mountain goats, and mountain lions that they pride themselves on – getting the biggest and best, simply for bragging rights.

But for us, it’s about filling our freezers full of meat for the winter, which is why we’re not beyond hunting those animals that most hunters would ignore.

My taste for random wild game came because I grew up eating things like squirrel and raccoon. My husband simply had a taste for anything he could hunt and put in the freezer.

Between the two us, we feel that the meat we bring to the table from our hunting trips is the best way to keep our family away from the chemical-laden meat sold in grocery stores.

With that said, when we get a deer, squirrel, rabbit, duck, or grouse the meat portions are quite small. Yes, a deer gives us a lot more meat than a squirrel ever would, but the steak cuts that you get are tiny.

This makes it way too easy to overcook them, and if you’ve ever seen a happy hunter sit down to a good venison steak meal, only to see the disappointment across his face when he sees that said steak is damn near well-done, well, you’d know why I had to come up with a better way to cook those thin steaks. 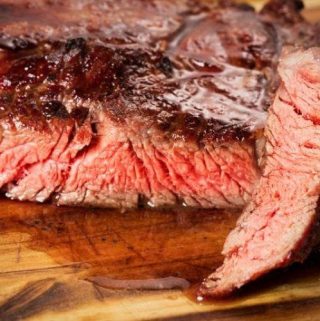 Venison steaks are so delicious, but only when they’re cooked right. The problem is they’re so darn thin, it’s way to easy to overcook them. That is, until you found this recipe!
5 from 2 votes
Print Recipe Pin Recipe
Prep Time 30 mins
Cook Time 1 min
Total Time 31 mins
Course Main Dish
Cuisine Comfort Food

I live at an elevation of 8,800 feet and the steaks I cook are usually ¼” thick, so the timing above works perfectly for a nice, thin, medium-rare steak. In fact, I’ve tested it to 45 seconds and a minute on each side and they turned out too dry and overcooked. Also, I only use cast iron or cast enamel, which I feel, gives the steaks a lot of added flavor and a beautiful sear. Is anyone else craving steak now? I am.
Tried this recipe?Let us know how it was!
Share the Love!
Previous Post: « Elk Meatloaf Recipe
Next Post: Bear Roast Recipe »