It’s not often you get to taste bear meat, but when the neighbors are nice enough to share a few roasts, tasting will be had!

There are fears around bear meat that it can cause food borne illnesses if not cooked properly, so most people simply stay away from it. It’s true, but as true as eating raw pork or chicken. Bears are carriers of trichinella spiralis and toxoplasma gondii, which are parasite that cause trichinosis and toxoplasmosis, neither of which anyone wants to flirt with.

Because of this, some would say that sitting down to a bear dinner, could be your last. Scary, right? Well, the same could be said for just about any meat that isn’t cooked to the proper temperature – raw chicken anyone? As important as it is to cook chicken and pork to the right internal temperature, wild game too has to be cooked right.

For bear, that internal temperature is 160⁰ F, which means you need to have a thermometer to be able to ensure the meat is cooked properly. Most recipes would have you cook bear meat at 375⁰ F for 20-25 minutes per pound, but any recipe adjustment should always be measured on that internal temperature of 160⁰ F; basically, you don’t want to see any pink meat when you slice into the bear.

The other important thing to know about bear, is what it was eating when it was killed. Now, this is hard to know if you’re gifted with meat and the hunter doesn’t want to share the location he got the bear, but most proper (and proud) hunters will let you know exactly where they got the bear down. The reason this is important is because if the bear was feasting on city trash, it’ll taste like trash.

However, if the hunter hunted away from town and was able to track down the bear’s feces to see what it was eating – hopefully tons of berries – you’ll get a much tastier bear. This is true for most wild game, actually. If you get a grouse and find that his gullet is filled with berries, the meat will have a sweeter taste, and if it’s filled with greens, he may have more of a sage taste.

The bear meat we got was put down in the high country and we had the perfect slow-cooker recipe to ensure it was cooked properly. Grab your Dutch oven and let’s get started! 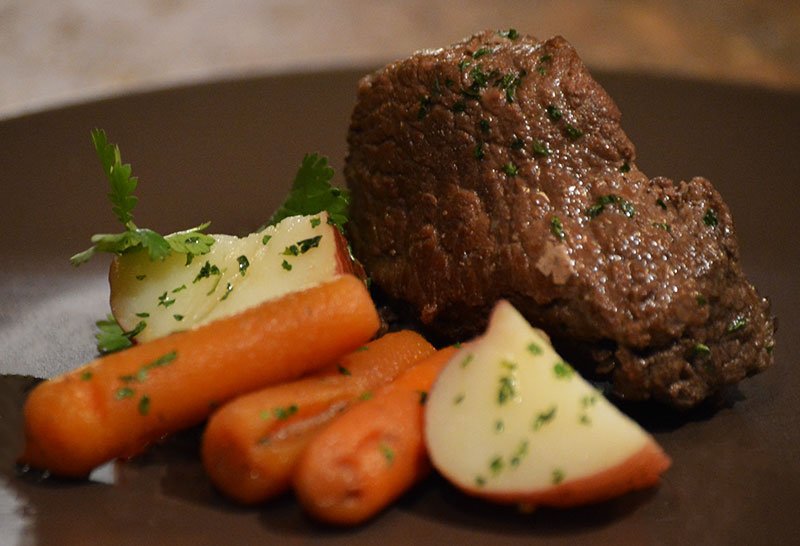 Keyword Bear Roast, Bear Roast Recipe
Tried this recipe?Let us know how it was!
Share the Love!
Previous Post: « How to Cook Thin Venison Steaks
Next Post: Ranch Dressing Without MSG »